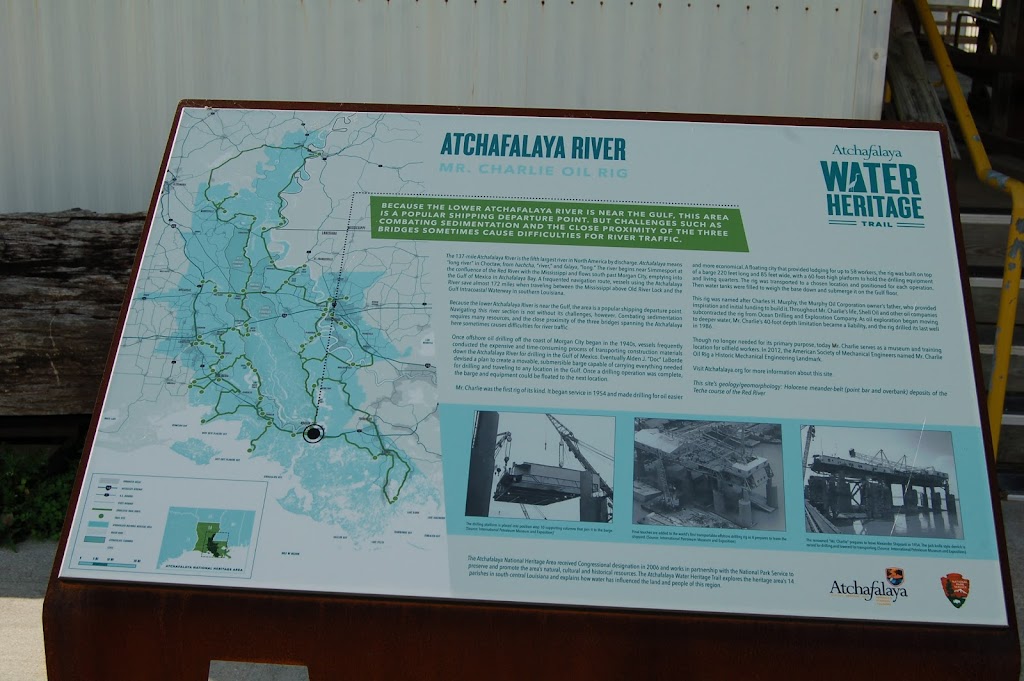 Because the lower Atchafalaya River is near the Gulf, this area is a popular shipping departure point. But challenges such as combating sedimentation and the close proximity of the three bridges sometimes cause difficulties for river traffic.


The 137-mile Atchafalaya River is the fifth largest river in North America by discharge. Atchafalaya means "long river" in Choctaw, from hachcha, "river," and falaya, "long." The river begins near Simmesport at the confluence of the Red River with the Mississippi and flows south past Morgan City, emptying into the Gulf of Mexico in Atchafalaya Bay. A frequented navigation route, vessels using the Atchafalaya River save almost 172 miles when traveling between the Mississippi above Old River Lock and the Gulf Intracoastal Waterway in southern Louisiana.

Because the lower Atchafalaya River is near the Gulf, the area is a popular shipping departure point. Navigating this river section is not without its challenges, however. Combating sedimentation requires many resources, and the close proximity of the three bridges spanning the Atchafalaya here sometimes causes difficulties for river traffic.

Once offshore oil drilling off the coast of Morgan City began in the 1940s, vessels frequently conducted the expensive and time-consuming process of transporting construction materials down the Atchafalaya River for drilling in the Gulf of Mexico. Eventually Alden J. “Doc” LaBorde devised a plan to create a movable, submersible barge capable of carrying everything needed for drilling and traveling to any location in the Gulf. Once a drilling operation was complete, the barge and equipment could be floated to the next location.

Mr. Charlie was the first rig of its kind. It began service in 1954 and made drilling for oil easier and more economical. A floating city that provided lodging for up to 58 workers, the rig was built on top of a barge 220 feet long and 85 feet wide, with a 60-foot-high platform to hold the drilling equipment and living quarters. The rig was transported to a chosen location and positioned for each operation. Then water tanks were filled to weigh the base down and submerge it on the Gulf floor.

This rig was named after Charles H. Murphy, the Murphy Oil Corporation owner’s father, who provided inspiration and initial funding to build it. Throughout Mr. Charlie’s life, Shell Oil and other oil companies subcontracted the rig from Ocean Drilling and Exploration Company. As oil exploration began moving to deeper water, Mr. Charlie’s 40-foot depth limitation became a liability, and the rig drilled its last well in 1986.

This site’s geology/geomorphology: Holocene meander-belt (point bar and overbank) deposits of the Teche course of the Red River.