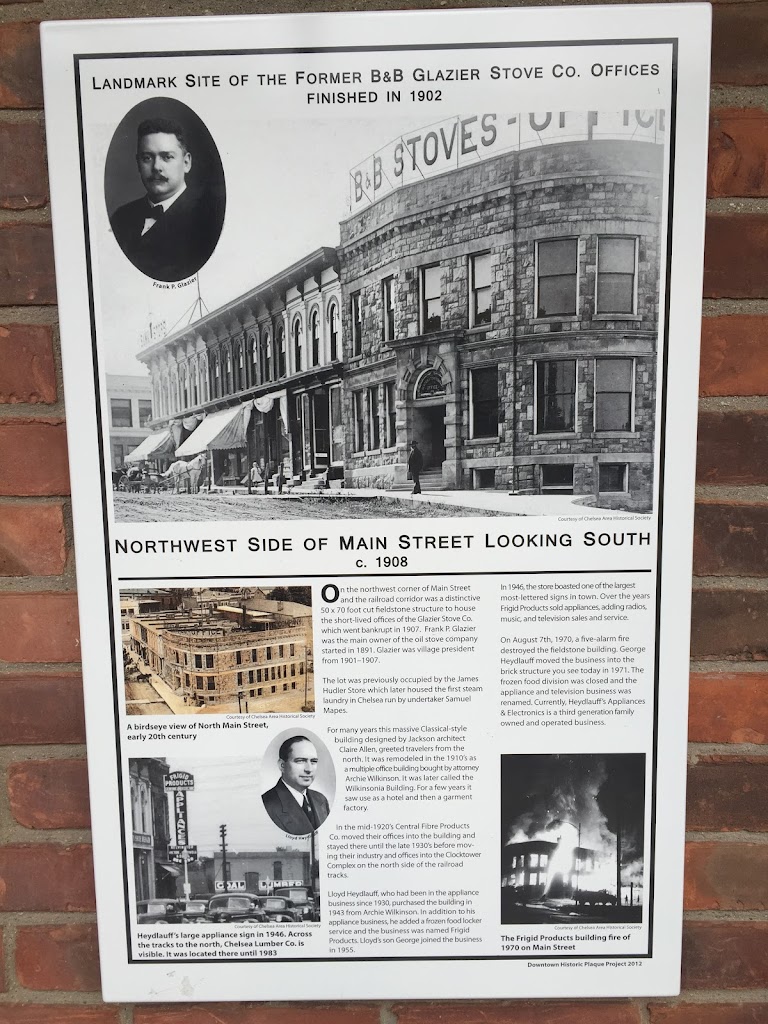 On the northwest corner of Main Street and the railroad corridor was a distinctive 50 x 70 foot cut fieldstone structure to house the short-lived offices of the Glazier Stove Co. which went bankrupt in 1907.  Frank P. Glazier was the main owner of the oil stove company started in 1891.  Glazier was village president from 1901 – 1907.

The lot was previously occupied by the James Hudler Store which later housed the first steam laundry in Chelsea run by undertaker Samuel Mapes.

For many years this massive Classical-style building designed by Jackson architect Claire Allen, greeted travelers from the north.  It was remodeled in the 19010’s as a multiple office building bought by attorney Archie Wilkinson.  It was later called the Wilkinsonia Building.  For a few years it saw use as a hotel and then a garment factory.

In the mid-1920’s Central Fibre Products Co. moved their offices into the building and stayed there until the late 1930’s before moving their industry and offices into the Clocktower Complex on the north side of the railroad tracks.

In 1946, the store boasted one of the largest most-lettered signs in town.  Over the years Frigid Products sold appliances, adding radios, music, and television sales and service.

On August 7th, 1970, a five-alarm fire destroyed the fieldstone building.  George Heydlauf moved the business into the brick structure you see today in 1971.  The frozen food division was closed and the appliance and television business was renamed.  Currently, Heydlauf’s Appliances & Electronics is a third generation family owned and operated business.