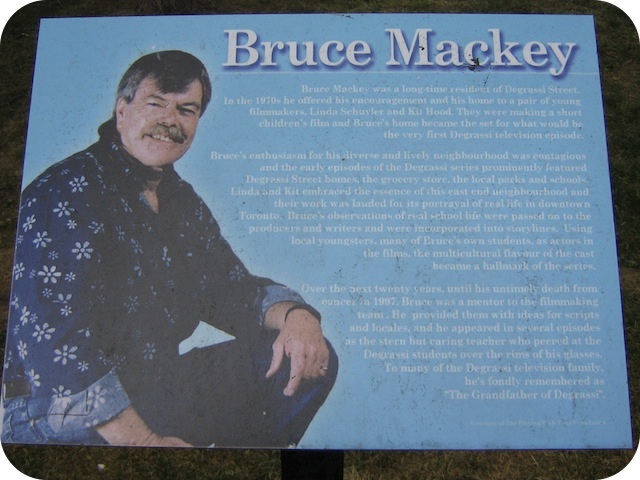 Bruce Mackey was a long-time resident of Degrassi Street. In the 1970s he offered his encouragement and his home to a pair of young filmmakers, Linda Schuyler and Kit Hood. They were making a short children's film and Bruce's home became the set for what would be the very first Degrassi television episode.
Bruce's enthusiasm for his diverse and lively neighbourhood was contagious and the early episodes of the Degrassi series prominently featured Degrassi Street homes, the grocery store, the local parks and schools. Linda and Kit embraced the essence of this east end neighbourhood and their work was lauded for its portrayal of real life in downtown Toronto. Bruce's observations of real school life were passed on to the producers and writers and were incorporated into storylines. Using local youngsters, many of Bruce's own students, as actors in the films, the multicultural flavour of the cast became a hallmark of the series.
Over the next twenty years, until his untimely death from cancer in 1997, Bruce was a mentor to the filmmaking team. He provided them with ideas for scripts and locales, and he appeared in several episodes as the stern but caring teacher who peered at the Degrassi students over the rims of his glasses. To many of the Degrassi television family, he's fondly remembered as "The Grandfather of Degrassi".