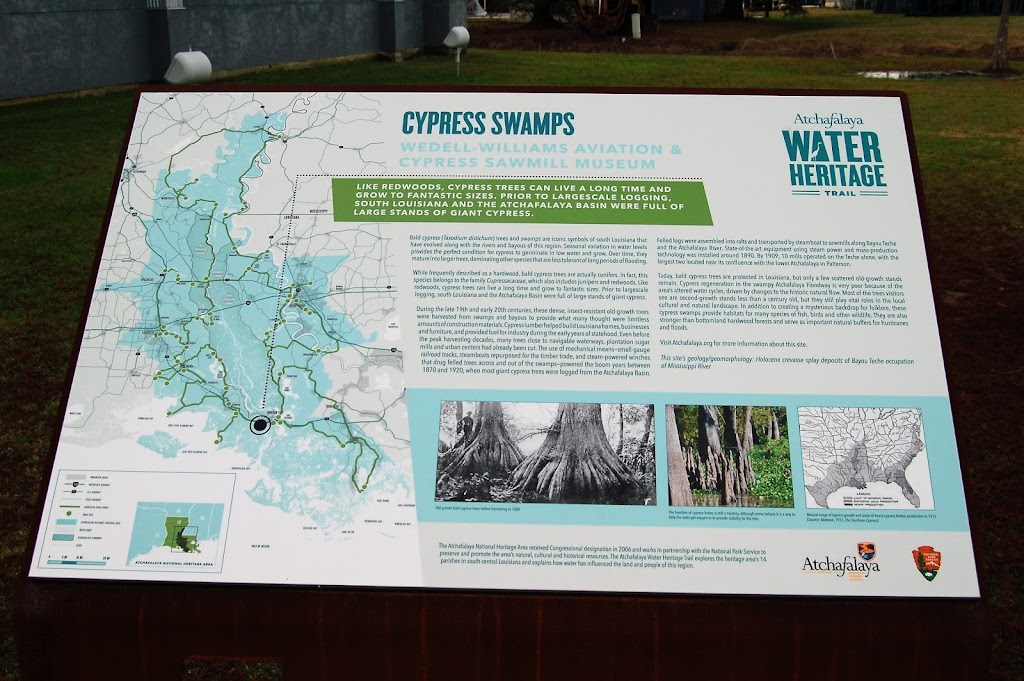 Like redwoods, cypress trees can live a long time and grow to fantastic sizes. Prior to largescale logging, south Louisiana and the Atchafalaya Basin were full of large stands of giant cypress.

Bald cypress (Taxodium distichum) trees and swamps are iconic symbols of south Louisiana that have evolved along with the rivers and bayous of this region. Seasonal variation in water levels provides the perfect condition for cypress to germinate in low water and grow. Over time, they mature into larger trees, dominating other species that are less tolerant of long periods of flooding.

While frequently described as a hardwood, bald cypress trees are actually conifers. In fact, this species belongs to the family Cupressacaceae, which also includes junipers and redwoods. Like redwoods, cypress trees can live a long time and grow to fantastic sizes. Prior to largescale logging, south Louisiana and the Atchafalaya Basin were full of large stands of giant cypress.

During the late 19th and early 20th centuries, these dense, insect-resistant old-growth trees were harvested from swamps and bayous to provide what many thought were limitless amounts of construction materials. Cypress lumber helped build Louisiana homes, businesses and furniture, and provided fuel for industry during the early years of statehood. Even before the peak harvesting decades, many trees close to navigable waterways, plantation sugar mills and urban centers had already been cut. The use of mechanical means—small-gauge railroad tracks, steamboats repurposed for the timber trade, and steam-powered winches that drug felled trees across and out of the swamps—powered the boom years between 1870 and 1920, when most giant cypress trees were logged from the Atchafalaya Basin. Felled logs were assembled into rafts and transported by steamboat to sawmills along Bayou Teche and the Atchafalaya River. State-of-the-art equipment using steam power and mass-production technology was installed around 1890. By 1909, 10 mills operated on the Teche alone, with the largest two located near its confluence with the lower Atchafalaya in Patterson.

Today, bald cypress trees are protected in Louisiana, but only a few scattered old-growth stands remain. Cypress regeneration in the swampy Atchafalaya Floodway is very poor because of the area’s altered water cycles, driven by changes to the historic natural flow. Most of the trees visitors see are second-growth stands less than a century old, but they still play vital roles in the local cultural and natural landscape. In addition to creating a mysterious backdrop for folklore, these cypress swamps provide habitats for many species of fish, birds and other wildlife. They are also stronger than bottomland hardwood forests and serve as important natural buffers for hurricanes and floods.