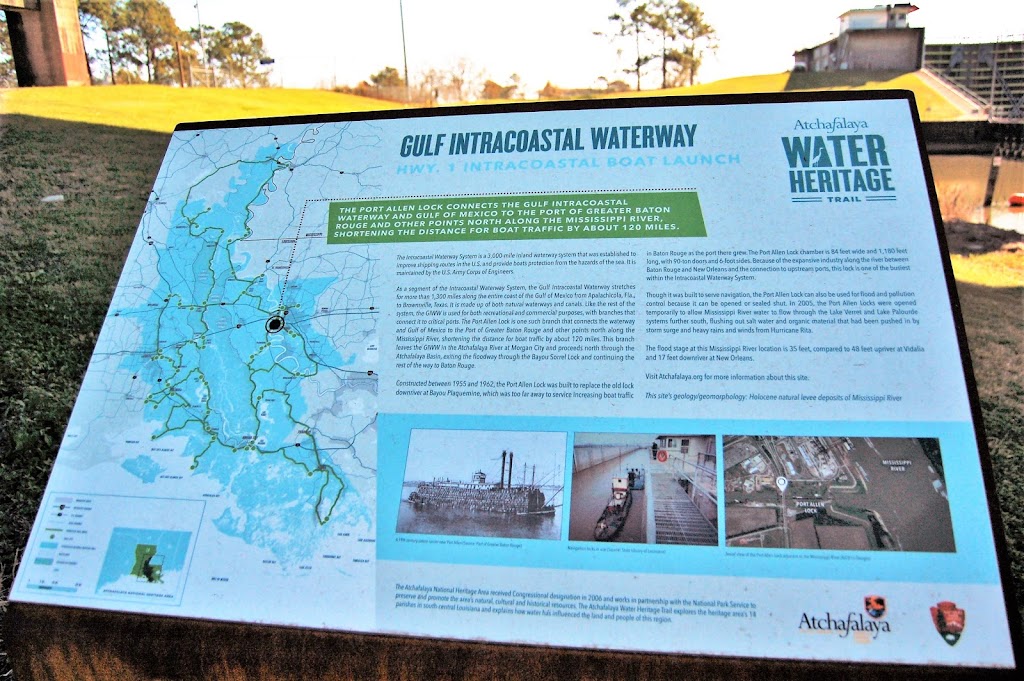 The Port Allen Lock connects the Gulf Intracoastal Waterway and the Gulf of Mexico to the Port of Greater Baton Rouge and other points north along the Mississippi River, shortening the distance for boat traffic about 120 miles.

The Intracoastal Waterway System is a 3,000-mile inland waterway system that was established to improve shipping routes in the U.S. and provide boats protection from the hazards of the sea. It is maintained by the U.S. Army Corps of Engineers.

As a segment of the Intracoastal Waterway System, the Gulf Intracoastal Waterway stretches for more than 1,300 miles along the entire coast of the Gulf of Mexico from Apalachicola, Fla., to Brownsville, Texas. It is made up of both natural waterways and canals. Like the rest of the system, the GIWW is used for both recreational and commercial purposes, with branches that connect it to critical ports. The Port Allen Lock is one such branch that connects the waterway and Gulf of Mexico to the Port of Greater Baton Rouge and other points north along the Mississippi River, shortening the distance for boat traffic by about 120 miles. This branch leaves the GIWW in the Atchafalaya River at Morgan City and proceeds north through the Atchafalaya Basin, exiting the floodway through the Bayou Sorrel Lock and continuing the rest of the way to Baton Rouge.

Constructed between 1955 and 1962, the Port Allen Lock was built to replace the old lock downriver at Bayou Plaquemine, which was too far away to service increasing boat traffic in Baton Rouge as the port there grew. The Port Allen Lock chamber is 84 feet wide and 1,180 feet long, with 90-ton doors and 6-foot sides. Because of the expansive industry along the river between Baton Rouge and New Orleans and the connection to upstream ports, this lock is one of the busiest within the Intracoastal Waterway System.

Though it was built to serve navigation, the Port Allen Lock can also be used for flood and pollution control because it can be opened or sealed shut. In 2005, the Port Allen Locks were opened temporarily to allow Mississippi River water to flow through the Lake Verret and Lake Palourde systems further south, flushing out salt water and organic material that had been pushed in by storm surge and heavy rains and winds from Hurricane Rita.

The flood stage at this Mississippi River location is 35 feet, compared to 48 feet upriver at Vidalia and 17 feet downriver at New Orleans.