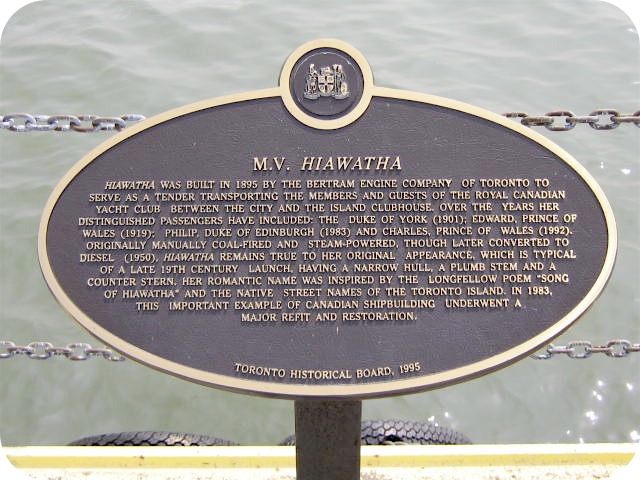 Hiawatha was built in 1895 by the Bertram Engine Company of Toronto to serve as a tender transporting the members and guests of the Royal Canadian Yacht Club between the city and the island clubhouse. Over the years her distinguished passengers have included: the Duke Of York (1901); Edward, Prince Of Wales (1919); Philip, Duke Of Edinburgh (1983) and Charles, Prince Of Wales (1992). Originally manually coal-fired and steam-powered, though later converted to diesel (1950), Hiawatha remains true to her original appearance, which is typical of a late 19th century launch, having a narrow hull, a plumb stem and a counter stern. Her romantic name was inspired by the Longfellow poem "Song of Hiawatha" and the native street names of the Toronto Island. In 1983, this important example of Canadian shipbuilding underwent a major refit and restoration.