The Exact Spot Where Girolamo Savonarola Was Hanged and Burned 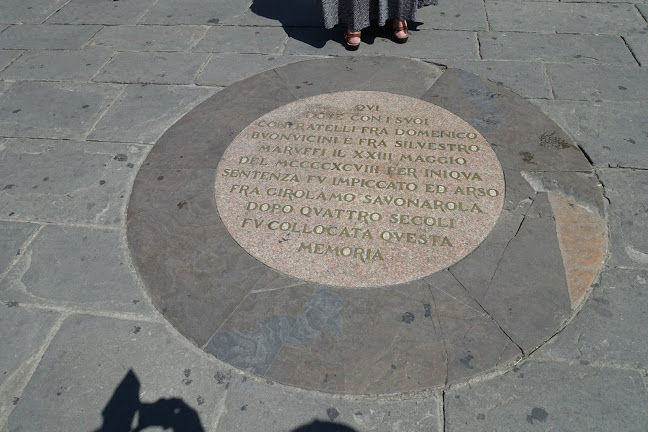 The piazza was already a central square in the original Roman town Florentia, surrounded by a theatre, Roman baths and a workshop for dyeing textiles. Later there was a church San Romolo, a loggia and an enormous 5th-century basilica. This was shown by the archaeological treasures found beneath the square when it was repaved in the 1980s. Even remains of a Neolithic site were found. The square started taking shape from 1268 on, when houses of Ghibellines were pulled down by the victorious Guelphs. The square remained a long time untidy, full of holes. In 1385 it was paved for the first time. In 1497 Girolamo Savonarola and his followers carried out on this square the famous Bonfire of the Vanities, burning in a large pile books, gaming tables, fine dresses, and works of poets. In front of the fountain of Neptune, a round marble plaque marks the exact spot where Girolamo Savonarola was hanged and burned on May 23, 1498.[5]